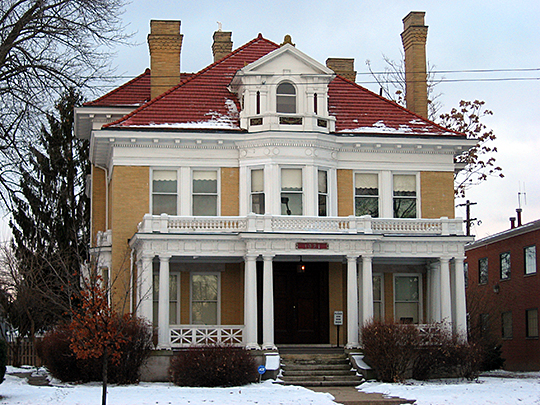 Laid out in 1797, Franklinton was one of the first villages in the Northwest Territory and the oldest community in central Ohio. It was founded by Lucas Sullivant, a surveyor assigned by the U.S. Government to survey the northern portion of the Virginia Military District. The location of Franklinton was quite strategic. It was located at the fork of two major waterways, as well as at a major stopover point on an Indian trail to Lake Erie from the Ohio River. In fact, several Indian settlements existed as late as the early 1700s in the area that would become Columbus.

In 1812, a group of Franklinton businessmen subdivided 1,200 acres east of the Scioto River and offered 20 acres to the state of Ohio for construction of a statehouse and penitentiary. Joel Wright was selected as architect of the new town. With assistance from Joseph Vance of Franklin County, he laid out a town reflective of his New England background. The city was named Columbus at the suggestion of General Joseph Foos, in honor of Christopher Columbus.

After 22 years of floods, epidemics, and a dispute over the city's designation as state capital, Columbus became a city in 1834. Canals joined the city to Lake Erie and the Ohio River, while stagecoaches provided land transportation to the rest of the state. As late as 1860, Columbus was still confined to a compact area not much larger than today's downtown.

Construction of the railroads changed the shape of the city. By the 1880s, Columbus had grown from two to more than 11 square miles and housed over 50,000 people. While industry prospered downtown, working-class neighborhoods were established in German Village, Franklinton, the Near North, and the Near East. Watercourses helped shape the city's emerging form. The city's development pattern began to extend outward along north-south and east-west rail lines. Streetcar lines and inter-urban electric rail lines reinforced this pattern, by allowing people to live further from the core of the city. In 1904, an 18-member commission was created to address the need for a citywide park system. Two years later, at the urging of this commission, City Council authorized the expenditure of $5,000 for the employment of experts to study how streets, alleys, boulevards, parks, and public grounds might be extended or changed to make the city more beautiful. In 1907, a Plan Commission composed of an architect, landscape architect, and sculptor from New York City, a civic advisor from Rochester, New York, and an architect from Philadelphia, was formed. Within a year, the group had prepared the first known plan for the city.

The 1908 Plan was a response to two mounting concerns. The first was what the Plan described as "the unromantic practical necessities of a rapidly growing and prosperous manufacturing city" — water supply and wastewater collection and disposal. The second was the city's "humiliating position" relative to other cities in its consideration of parks, parkways, and playgrounds. In both cases, the underlying goal was to secure Columbus' position as one of the nation's great cities and to establish a civic environment that recognized its function as Ohio's governmental and education center.

The Plan Commission recommended that the State Capitol be surrounded by a civic center of great public buildings and open spaces. A parkway was to encircle the city three miles from its center. Diagonal streets would radiate from the parkway, breaking what the plan called the "Maltese Cross" development pattern along the railroads. The streets of Columbus would be adorned by monuments, sculpture, and street furniture, and would be rid of overhead utility poles and wires. Small parks and playgrounds were called for in the neighborhoods, while linear parks were to be developed along the Olentangy and Scioto Rivers. Some of the recommendations of that Plan have left their mark on current city form, most notably the open space system along the Olentangy River.

A 1919 River Front Plan provided more specific detail for downtown river front improvements. It is likely that this plan and its recommendations were influenced greatly by the destruction caused during the disastrous 1913 flood. Plans for the civic center were not fully realized and most of the land surrounding the capitol was developed privately. The advent of the automobile sparked such urban expansion that the perimeter parkway and diagonal boulevards were never built as intended. Years later, an auto-oriented version of the same concept would emerge, with the city encircled instead by two circumferential freeways and radial interstate highways.