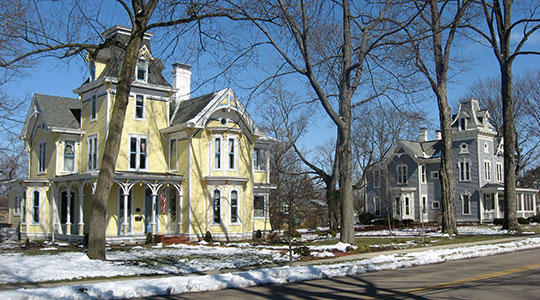 Lebanon's history is a point of pride for its residents and establishes its unique position in the region as a picturesque community with a rich history. It is an important crossroads in the region, and that position has influenced its growth and evolution over the years.

Lebanon's long history was a result of its strategic location, a one-day stage coach ride from Cincinnati. In 1802 four settlers laid out the first one hundred lots around Main and Broadway. Broadway was designed to be wide enough to turn a stagecoach around. In 1803 The Golden Lamb was opened as a tavern and log cabin inn to serve travelers.

The Cincinnati, Lebanon & Northern Railroad was constructed in 1876 to connect Cincinnati to Dayton and passed through Lebanon. The rail line reached Lebanon in 1881. The total line was 36.1 miles from Cincinnati to Dodd. It was later connected to the Middletown and Cincinnati Railroad in 1894.

The Warren County Canal was navigable by 1840. Part of the Miami and Erie Canal, it was about 20 miles long and connected Lebanon to the main canal route in Middletown. It was never successful as a connection and was abandoned within a decade.

In Lebanon, like most communities in exurban counties, most of the growth has taken place in the past two decades. The greatest population increase in Lebanon was between 1990 and 2000. 6,501 new residents moved into Lebanon during this time representing a 62% population increase.

For most of Lebanon's history downtown was the functional heart of the community. It served as the center of commerce and civic life. However, as the city evolved in the 20th century, focus was diverted to the automobile-oriented corridors like Columbus Avenue, along Broadway north of downtown and Main Street east of downtown.