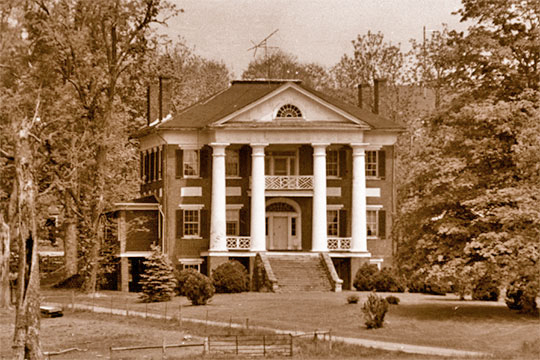 The Alexander farm was the focus of the original settlement of the town. James Alexander, a Revolutionary War soldier, settled here in 1774. His first house was burned by Indians the year of the Dunmore War; the second was built on what became Main Street. The third "old Hundred" was built low down on the western slope of Green Hill (now gone). The reconstructed Fletcher-Ellis House is built on the site of this house. It was here that the first court proceedings were conducted before the first courthouse was built; the first Presbyterian church services were held here also. The Brynside, Erskine, Clark and Dunlap families soon joined James Alexander in the years following 1774. Michael Erskin built several mills in or near the town in the late 18th century. When Monroe County was formed from Greennbrier in 1799, the new court settled upon the Alexander farm as a place for county buildings, it being in the middle of a prosperous and thriving farming community. James Alexander responded by giving the court one acre of land and laid out a town of 25 acres in 1/4-acre lots. The trustees of the new town (in August, 1799) resolved that "the size of the buildings on each lot must be one square log house, of the same size of 16 x 18 feet out to out, two stories high of common height, roof of shingles, and chimneys of brick or stone; to be floored and finished inside in a workman-like manner."

The town received its name from the union of militia units that gathered in the Royal Oak Field each Spring and Fall for a muster. These musters occurred each year during the last decade of the 18th century up to and through the Civil War.

Union was chartered and also received a post office in 1800. By 1804 a log courthouse and stone jail had been built. There were several taverns or inns, three merchants, a tailor, a wheelwright, a lawyer and approximately 25 residences. A brick courthouse was built in 1820. The town doubled in size in the pre-Civil War years and many new and diverse businesses were established. Union grew rapidly as a trade center for the surrounding rural area until the Civil War. Both Confederate and Federal troops were often stationed in Union as it was a frequent rest station utilizing the bounty of the rural area.

Samuel Kercheval in his A History of the Valley of Virginia, and writing in 1833, describes Union as a sprightly village. He seems to have been quite impressed with the vitality of the small town and with its surrounding natural beauty. Ann Royal, writing around the same time period, describes Union as a poor village, but with a very elegant brick courthouse and two remarkable homes, Walnut Grove and Elmwood.

At the turn of the 20th century Union began to grow again and much new construction was accomplished. In 1816 the business and professional interest of Union included 2 banks, 2 general stores, a planing mill, a printing office, 2 blacksmiths, a shoemaker and a milliner. It also had 2 telephone centrals, 3 attorneys, 2 physicians and a dentist.